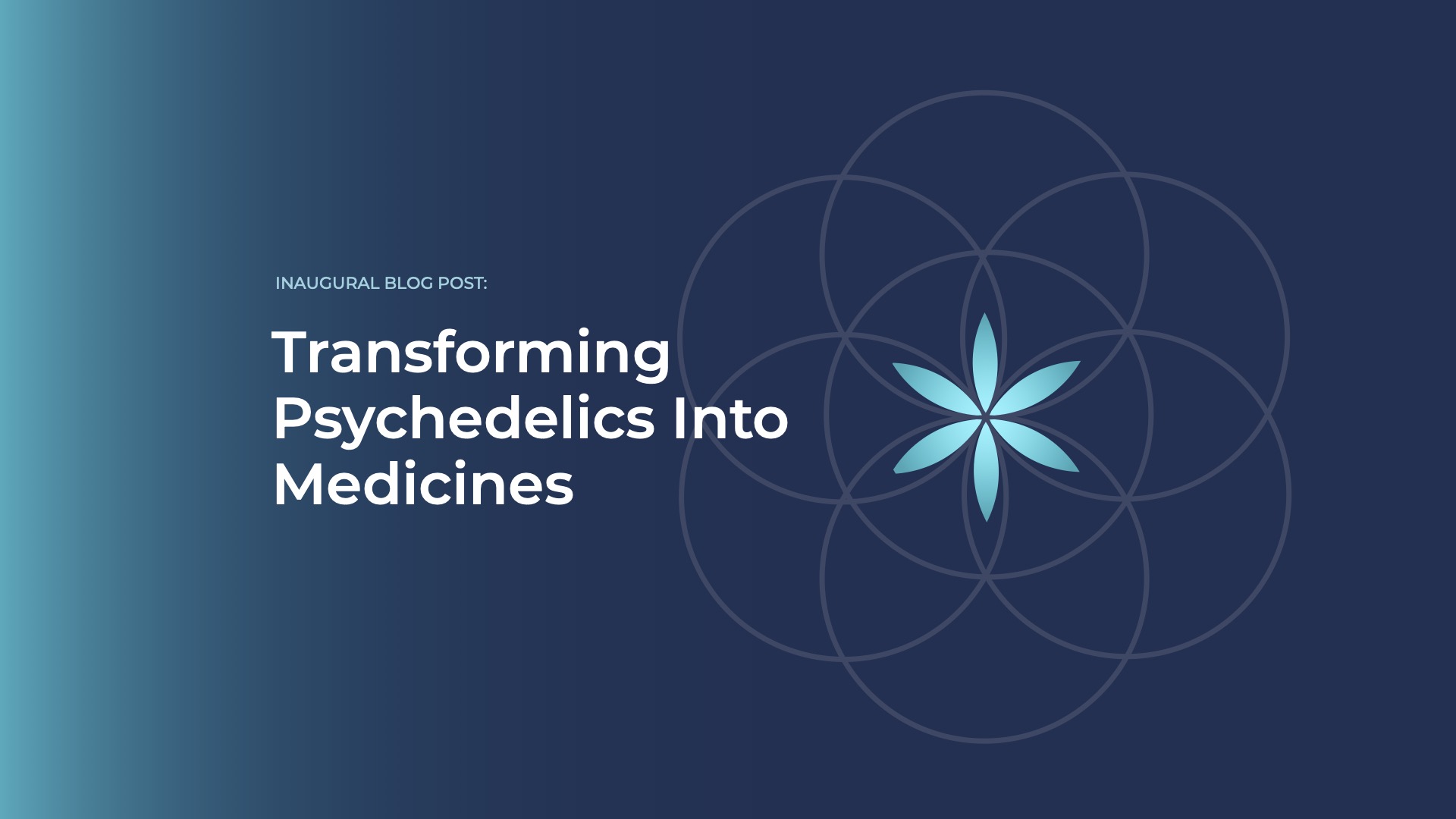 Sometimes, the answers are hiding in plain sight.

A decade ago, I left Wall Street to pursue a career as a psychotherapist. Part of the pull, for me, was a desire to get involved given the overwhelming magnitude of the need: statistics from the National Institute of Mental Health show 1 in 5 American adults suffer from mental illness, and some 280 million people worldwide are impacted by depression according to the World Health Organization.

Practically speaking, it means every one of us, whether we realize it or not, know a friend or family member who is wrestling with their mental health. At the same time, and despite how pervasive - and serious - a problem this is, existing treatment protocols for mental health (and depression in particular) have been frustratingly slow to advance.

I felt there simply had to be a better way, a belief that led me to graduate school and research into new approaches for treating depression. It was at this time that I came across groundbreaking research from Johns Hopkins, published in 2011, on the durable effects of psychedelics (in particular, psilocybin) on otherwise healthy volunteers in clinical studies, and was astounded by the results: “[One month later] 61% of volunteers considered the psilocybin experience... to have been the single most spiritually significant of their lives, with 83% rating it in their top 5.”

That same study showed that a full 14 months following treatment, 89% of volunteers noted at least moderate positive behavioral changes. In other words, while we have spent decades (and fortunes) prescribing medications that must be taken daily, with many patients experiencing major side effects and without consistent efficacy, just one to two doses of psilocybin were reported in clinical trials to produce “better social relationships with family and others, increased physical and psychological self-care, and increased spiritual practice [at the 14-month follow-up].”

Formal clinical research on psychedelic compounds began nearly 70 years ago, in the 1950s, and continued into the 1960s before it was halted for, primarily, political and cultural reasons. Only recently has research into the potential therapeutic value of these compounds re-initiated. Through this research, scientists are generating data that suggests psychedelics may have remarkable, and desperately needed, healthcare applications.

I first left finance hoping to play a small role in addressing a significant problem. But as I came to appreciate the potential of psychedelics, I realized there was a significant opportunity before me to play a part in something much larger, thanks to the convergence of three foundational themes:

Taken together, there was a clear need for an enterprise whose mission was, at its core, to unlock the full therapeutic potential of psychedelics for the hundreds of millions of people worldwide who could benefit from their application. It was clear the time was right to play a role in the controlled clinical evaluation of psychedelics as investigational drugs for depression and other indications, with the goal of creating mainstream psychedelic medicines.

I decided to act, and founded Eleusis—a unique life sciences company dedicated to the discovery and development of psychedelic drug candidates with the aim of creating safe, effective, convenient medicines that are accepted by insurers and health care providers.

The team at Eleusis has been working hard for nearly a decade to be at the forefront of the clinical evolution of psychedelic therapies.

Now, we are ready to take our next step forward, becoming a publicly listed company through a merger with Silver Spike Acquisition Corp II (NASDAQ: SPKB), a special purpose acquisition company sponsored by Silver Spike Capital, themselves pioneers in the application of transformative technologies in the alternative health and wellness categories.

We couldn’t be more excited. Yet, at the same time, we know there is an enormous amount of work to do. We encourage interested investors, clinicians, or those simply curious about the future of care as we explore and aim to expand the therapeutic applications of psychedelics to visit this Blog and our Social Channels often. We’ll be talking about everything from drug development to new applications for psychedelics beyond psychiatric care.

We welcome you to join us on our journey.

This document contains certain “forward-looking statements” within the meaning of the federal securities laws, with respect to the proposed transaction between Eleusis Holdings Limited and Eleusis Inc. (collectively, “Eleusis”) and Silver Spike Acquisition Corp II (“Silver Spike”). These forward-looking statements are generally identified by words such as “anticipate,” “believe,” continue,” “could,” “estimate,” “expect,” “intend,” “may,” “might,” “plan,” “possible,” “potential,” “predict,” “project,” “should,” “strive,” “would” or the negatives of these words or words of similar meaning. These forward looking statements include, but are not limited to, statements regarding the benefits of the transaction, the anticipated timing of the transaction, Eleusis’s product candidates and expected markets, and Eleusis's projected future results. Forward-looking statements are predictions, projections and other statements about future events that are based on current expectations and assumptions and, as a result, are subject to risks and uncertainties. Such forward-looking statements are based upon the current beliefs and expectations of the management of each of Silver Spike and Eleusis and are inherently subject to significant business, economic and competitive risks, uncertainties and contingencies. Many factors could cause actual future events to differ materially from the forward-looking statements in this document, including but not limited to: (i) the risk that the transaction may not be completed in a timely manner or at all, which may adversely affect the price of Silver Spike's securities, (ii) the failure to satisfy the conditions to the consummation of the transaction, including the adoption of the agreement and plan of merger by the shareholders of Silver Spike, the satisfaction of the minimum trust account amount following redemptions by Silver Spike's public shareholders and the receipt of certain governmental and regulatory approvals, (iii) the lack of a third party valuation in determining whether or not to pursue the proposed transaction, (iv) the occurrence of any event, change or other circumstance that could give rise to the termination of the agreement and plan of merger, (v) the effect of the announcement or pendency of the transaction on Eleusis’s business relationships, performance, and business generally, (vi) risks that the proposed transaction disrupts current plans of Eleusis and potential difficulties in Eleusis employee retention as a result of the proposed transaction, (vii) the outcome of any legal proceedings that may be instituted against Eleusis or against Silver Spike or Eleusis related to the agreement and plan of merger or the proposed transaction, (viii) the ability of Eleusis’s securities to qualify to list on The Nasdaq Capital Market, (ix) volatility in the price of Silver Spike's securities due to a variety of factors, including changes in the competitive and highly regulated industries in which Eleusis plans to operate, variations in performance across competitors, changes in laws and regulations affecting Eleusis’s business and changes in the combined capital structure, (x) the impact of the global COVID-19 pandemic, (xi) the enforceability of Eleusis's intellectual property, including its trademarks, and the potential infringement on the intellectual property rights of others, cyber security risks or potential breaches of data security, (xii) the ability of Eleusis to protect the intellectual property and confidential information of its customers, (xiii) unexpected costs, charges, or expenses resulting from the proposed business combination, (xiv) evolving legal, regulatory and tax regimes, (xv) the possibility that Eleusis may be adversely affected by other economic, business and/or competitive factors, (xvi) actions by third parties, including government agencies, and (xvii) the ability to implement business plans, forecasts, and other expectations after the completion of the proposed transaction, and identify and realize additional opportunities. The foregoing list of factors is not exhaustive. You should carefully consider the foregoing factors and the other risks and uncertainties described in the “Risk Factors” section of Silver Spike’s Quarterly Reports on Form 10-Q, the registration statement on Form S-4 and proxy statement/prospectus included therein discussed below and other documents filed by Silver Spike and Eleusis from time to time with the U.S. Securities and Exchange Commission (the “SEC”). You are cautioned not to place undue reliance on these forward-looking statements as a predictor of future results, performance and/or achievements as projected financial information and other information are based on estimates and assumptions, whether or not identified in this document, that are inherently subject to various significant risks, uncertainties, contingencies and other factors, many of which are difficult to predict and generally beyond the control of the parties. These filings identify and address other important risks and uncertainties that could cause actual events and results to differ materially from those contained in the forward-looking statements. Forward-looking statements speak only as of the date they are made. Readers are cautioned not to put undue reliance on forward-looking statements, and Eleusis and Silver Spike assume no obligation and do not intend to update or revise these forward-looking statements, whether as a result of new information, future events, or otherwise. Neither Eleusis nor Silver Spike gives any assurance that either Eleusis or Silver Spike will achieve its expectations.

Additional Information and Where to Find It

This document relates to a proposed transaction between Eleusis and Silver Spike. This document does not constitute an offer to sell or exchange, or the solicitation of an offer to buy or exchange, any securities, nor shall there be any sale of securities in any jurisdiction in which such offer, sale or exchange would be unlawful prior to registration or qualification under the securities laws of any such jurisdiction. Silver Spike and Eleusis intend to file a registration statement on Form S-4 that will include a preliminary proxy statement for the solicitation of Silver Spike shareholder approval and prospectuses of Silver Spike and Eleusis Inc. The proxy statement/prospectus will be sent to all Silver Spike stockholders. Silver Spike and Eleusis Inc. also will file other documents regarding the proposed transaction with the SEC. BEFORE MAKING ANY VOTING DECISION, INVESTORS AND SECURITY HOLDERS OF SILVER SPIKE ARE URGED TO READ THE REGISTRATION STATEMENT, THE PROXY STATEMENT/ PROSPECTUS AND ALL OTHER RELEVANT DOCUMENTS THAT ARE OR WILL BE FILED WITH THE SEC IN CONNECTION WITH THE PROPOSED TRANSACTION AS THEY BECOME AVAILABLE BECAUSE THEY WILL CONTAIN IMPORTANT INFORMATION ABOUT THE PROPOSED TRANSACTION.

Investors and security holders will be able to obtain free copies of the proxy statement/prospectus and all other relevant documents filed or that are or will be filed with the SEC by Silver Spike and Eleusis through the website maintained by the SEC at www.sec.gov. In addition, the documents filed by Silver Spike and Eleusis Inc. may be obtained free of charge from their respective websites at silverspikecap.com or by written request to Silver Spike at 600 Madison Ave, Suite 1600, New York, New York 10065.

WRITTEN BY
Shlomi Raz
Shlomi is the founder and chief executive officer of Eleusis. Since founding Eleusis in 2013, Shlomi has overseen the company’s corporate and clinical development efforts. Prior to founding Eleusis, Shlomi was a Managing Director at Goldman Sachs, and held a similar role at JPMorgan where he began his corporate career. Shlomi holds an MA in psychology from New York University and a BS in finance from Georgetown University.